5 months ago 13 min read
By using our website, you agree to the use of cookies.
Learn more Got it! 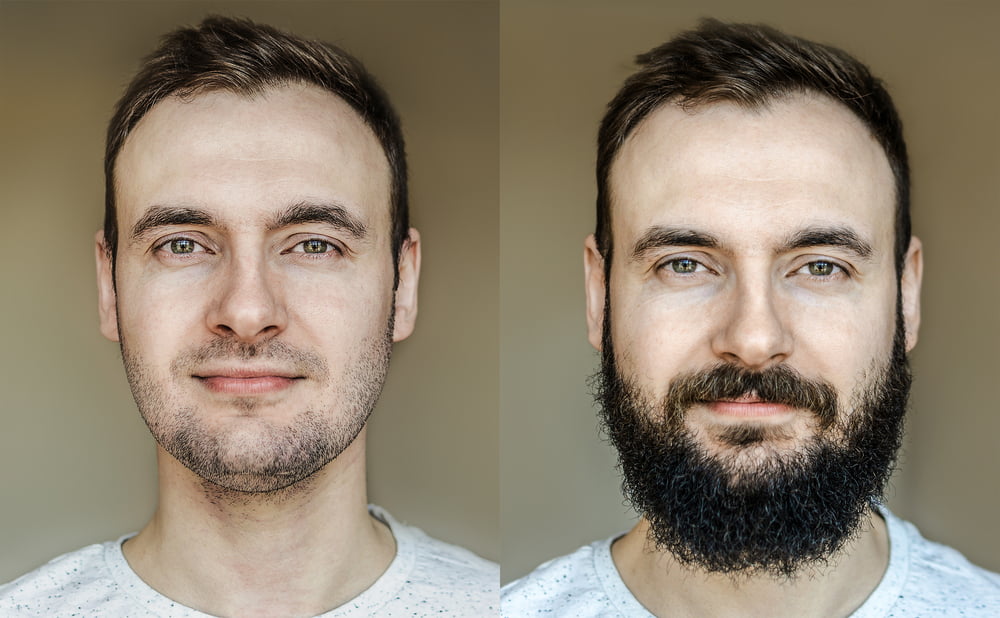 You Can’t Grow a Beard? Here is Why

You Can’t Grow a Beard? Here is Why – Not all men are equal when it comes to growing beards. While some men sport a beautiful Viking beard, others are desperate to grow a fine fuzz on their chin but can’t. Bearded or not bearded, where does this difference come from?
On average, beard hair grows 0.4 millimeters per day or 1.2 centimeters per month. But as the beard craze makes a comeback, some men can’t seem to get a good beard even after they put their razor away. They may have very thin or sparse hair or no beard at all.

Male characteristics are often attributed to testosterone, but another hormone, androstanolone (or dihydrotestosterone or DHT), specifically stimulates their appearance. This hormone, derived from testosterone, increases sharply at the time of puberty. In adults, it is estimated that 10% of testosterone is converted into dihydrotestosterone each day by the testicles and prostate in men and by the ovaries in women. Dihydrotestosterone leads to the development of the male genitals (scrotum, penis, testicles…) as well as the growth of pubic hair and beard.

Bearded or not bearded: a question of hormones, but not only

The number of DHT receptors in the skin cells determines the amount of beard hair on the face. If the cells on the face have a lot of receptors, then the man will be very bearded. Conversely, if the cells have few DHT receptors, they will have a very thin beard or very little hair. Fortunately, there are few solutions in this case. Although some drugs can increase testosterone production (and therefore indirectly that of dihydrotestosterone), it is impossible to increase the number of receptors, determined by genetics. On the other hand, individuals react differently to the same testosterone level because this again depends on genetic expression.

Other causes may explain why some men do not have a beard:

How to have a beautiful beard?

Healthy skin and diet contribute to the growth of a beautiful beard. Therefore, it is recommended to moisturize and exfoliate the skin to have a sufficient intake of fiber, protein, and vitamins. Finally, you should know that miracle products such as castor oil only beautify an existing beard but do not promote growth. The same goes for shaving, which in no way stimulates hair growth.

Having a beard or not also depends on a parent. Studies show that a beardless man is generally descended from parents who were themselves bearded. They then transmitted this characteristic to their descendants, who could not grow a beard. This is the case for baldness, for example.

This genetic inheritance from a parent strongly reduces the chance of a concerned man having a large beard. The explanation for this is the level of hormones responsible for hair growth. Indeed, this indicates a low level of testosterone, but especially dihydrotestosterone in the body.

To summarize these two paragraphs, hypertrichosis is the excessive development of hair in women and men. The phenomenon of men without beards is the result of the opposite effect of this disease. However, this is not irreversible. In fact, by increasing the level of hair growth hormones in the body, a beardless man will be able to have hair after a while.

Sometimes men don’t have beards because they are simply not allowed to have one. This is usually done as part of a rule or way of life. It is particularly uniform or precautionary to ensure the safety of a person.

For example, firefighters were recently forced to shave with straight razors for greater precision. There are several reasons involved in this decision made by officials in the field. First, beards reduce the seal of firefighter masks. Second, this hair can easily catch fire.

Finally, there are a good number of men who just don’t want to have one. They feel that they are not comfortable with a beard. This may be related to their aesthetics or otherwise. However, they prefer to be clean-shaven.

The good news is that in summer, beards grow a little faster because of the vitamin D contained in the sun’s rays. Several natural oils, such as castor oil, can also stimulate the growth of the hair follicle. So there’s no need to have a complex about your beard. The most important thing is to accept yourself as you are, beard or no beard.

10 Things You Didn’t Know About Growing a Beard

Why do beards make a man more attractive?

Beard Care from A to Z: How to Get the Perfect Beard

How to Make Your Beard Soft – 8 Easy Beard Softening Tips

How Can Facial Hair Reflects Your Personality

Minoxidil For Beard 101: Does it REALLY Promotes Beard Growth?